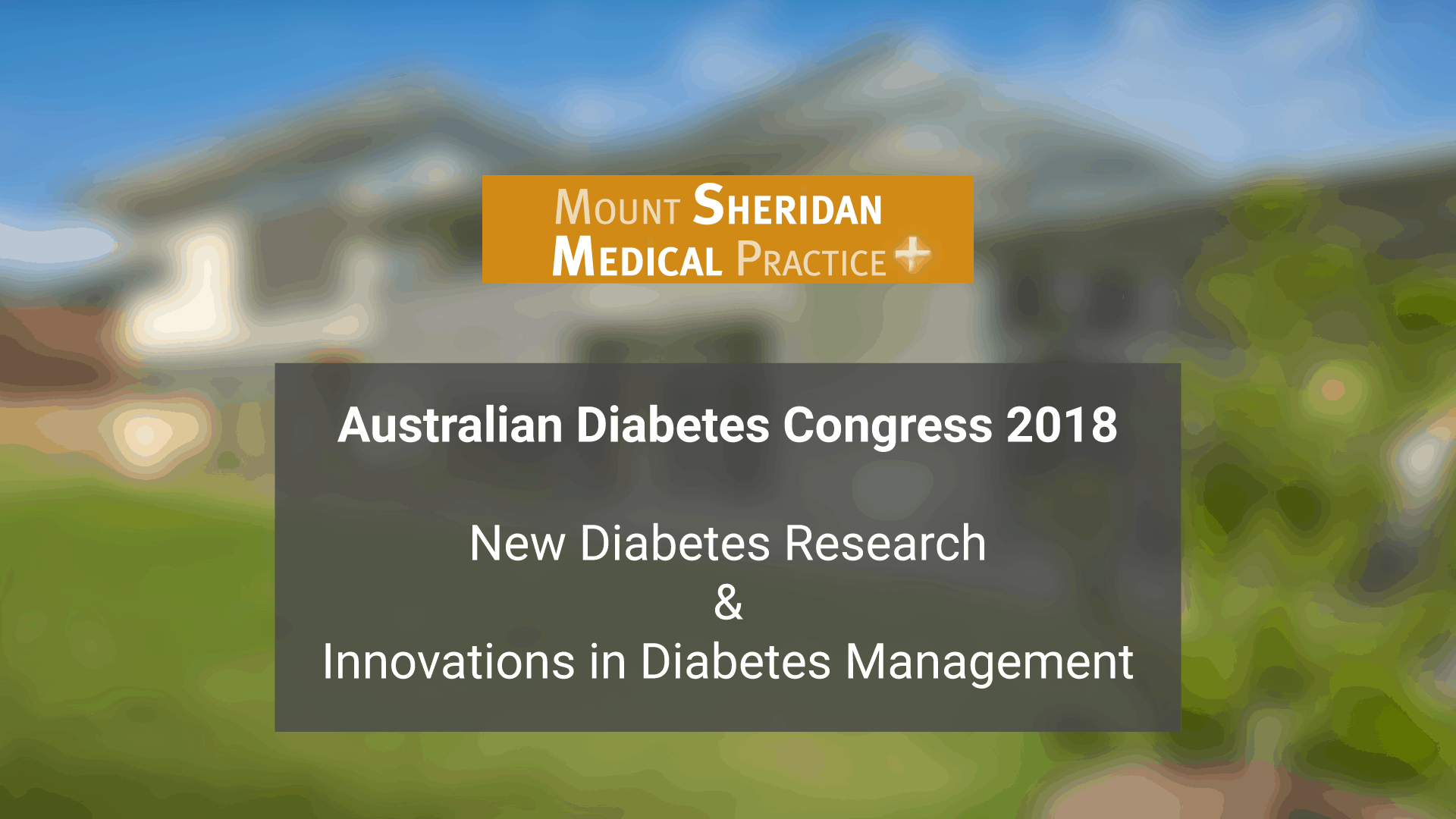 I’ve just been to the Australian Diabetes Congress meeting, and I wanted to take the opportunity to share with you some of the new research in diabetes and some of the innovations in diabetes management. We covered a lot of things about diabetes at this conference, and all about the complications of diabetes. One of the things was the fact that diabetes is now the leading cause of chronic kidney disease in Australia. It’s overtaken other causes for kidney problems. Kidneys are really important organs in the body, they filter toxins out of the system. They also help keep your fluid balance, your salts right. They also produce other hormones that help produce red blood cells in the body, so they do a number of things.

Diabetes is now the leading cause for kidneys to fail in Australia.

They stress the importance of getting a yearly kidney check if you’ve got diabetes or other risk factors for chronic kidney disease, so things like having high blood pressure, family history of kidney problems, hypertension, or if you’re an Aboriginal or Torres Strait Islands over the age of 30. These are all things that put you at greater risk of chronic kidney disease.

The investigation that we do to look to see if you’ve got kidney problems is a blood test and a wee test. We need to do this because unfortunately, you don’t get any symptoms that your kidneys aren’t working, often until you’ve lost about 90% of the function of the kidneys.

And at that stage, there’s not a lot of things that we can do to try and prevent you developing end-stage renal failure. So early on, we can detect changes in the blood, and we can check changes in the wee sample to see whether you’re developing chronic kidney disease. If we find that early, then we can treat that with some medications, making sure your blood pressure is perfectly controlled, and there are also some new medications which we may be adding on to your existing treatment if you already have kidney disease that’s showing great promise in reducing the progression of kidney disease to kidney failure.

The conference this year focused a little bit more on physical activity as one of the many lifestyle changes that are important in diabetes.

So those who are not active are more likely to die than those who are more active. It also is associated with an increased risk of diabetes. So again, the message was very much about being active.

There were some interesting studies that were presented, one showing that for office workers, if you’ve got a sedentary lifestyle, just sitting at the desk all day, you’re more likely to have a rise in your blood pressure, which is a risk for these other complications. Whereas if you can just simply get up for three to five minutes every half an hour, that actually eliminates that rise in blood pressure that we see with people who just sit at their desk all day. So again, there are little changes that you can make that improve things for your health in the long run.

With diabetes, it’s important to have an active lifestyle.

We live in Cairns, where we’ve got wonderful facilities and wonderful climate to be active. We’ve got a number of public pools, we’ve got the beaches. When’s the last time that you’ve gone down and had a walk along the Esplanade or any of the different red arrow, blue arrow, green arrow, yellow arrow tracks that the council had? Or there are other walking tracks on the north and south side of Cairns. How about the increasingly good bicycle tracks that are even off the road now, where you can go for a bike ride.

All these things are great, healthy sort of things that you can do for your lifestyle. The council run various programmes on the Esplanade, where you can do things like Zumba or aqua aerobics. Every Saturday morning, a few hundred people come down and do a thing called Park Run, which is a five kilometre run or walk. If you register with Park Run, they’ll send you your time that you manage to do that week. There are lots of opportunities within Cairns to be active, and we should be out there enjoying the healthy lifestyle. It’s not only enjoyable, it also reduces your risk of cardiac disease, of stroke, of diabetes.

Over the last few years, there have been a number of changes in management of diabetes. Years ago, we used to tell people, every four or five years we’ve got to sort of relearn everything you know about diabetes, because things are changing. These days, it seems almost every year, the protocols and the medications that we use are changing.

We’re getting a lot more data about a number of the new drugs that are out there in the market that we can use to treat your diabetes successfully.

There’s been a couple of new advances and people are using insulin. Insulin is used in both type 1 and type 2 diabetes, especially those with type 2 diabetes. There are new forms of longer acting insulin. So if you’re on insulin once a day, sometimes that insulin will wear off at the end of the 24 hours. But there are new insulins now that last a lot longer, which means you’ll have better control of your sugars for the whole 24 hours, which leads to less complications of diabetes.

Also changes in some of what are called mixed insulins that have both that long-acting and the short-acting insulin. Again, the profiles, the way the insulin works at controlling your sugars, have been improved with these new insulins.

For some people with type 1 diabetes, they’re on what’s called an insulin pump, where it just slowly delivers the insulin to their body. There’s a now less expensive and more simple form of a pump that can be used in type 2 diabetes. I think that’s going to be a very small group of people, but for people who are taking a long-acting insulin as well as maybe a couple of extra injections during the day time, there’s now a little device that can stick on the skin. It lasts for 24 hours, it’s just the one needle, it sits there and it’s very easy to deliver boluses of insulin during the day if you need to. So that’s an innovation that might be useful.

Another innovation that’s come along is just a device to help you give yourself insulin. If you’re someone who is a bit scared of needles or find you have trouble when you’re trying to inject the needle, the needle bends or you find it’s painful injecting, there’s a new little device. I’ve got one of them here, it’s called TickleFLEX, and it’s just a silicone device with little rubber bubbles on them there, which when it sticks onto your skin, it holds the skin more firmly so it doesn’t move as much. And also because you’re getting all this stimulation on your skin here, you don’t feel the needle as much.

If we look at a standard diabetes needle now, it’s very small anyway, but what we simply do is put this into the device, and when you inject the needle, then you don’t feel it as much and it anchors it to the skin better. These things are not very expensive, they probably last a year. So for some people, this could be a very simple, but it might solve a problem for some people.

We’ve also learned a little bit more about some of the oral medications that we’re using, and very much there’s a new class of medication that’s been around for a few years now. There’s increasing evidence over the last couple of years that, if you’ve got heart problems already and you’ve got diabetes, then we really should be changing you onto this new class of medication. It dramatically reduces the risk of further heart disease and admission to hospital due to things like heart failure. So this is something we’re actively looking at our diabetic patients. If they’ve got risk factors for heart disease, then we’d be thinking about whether this is a better drug for them.

If you would like to book an appointment to discuss diabetes care and management, click the button below.